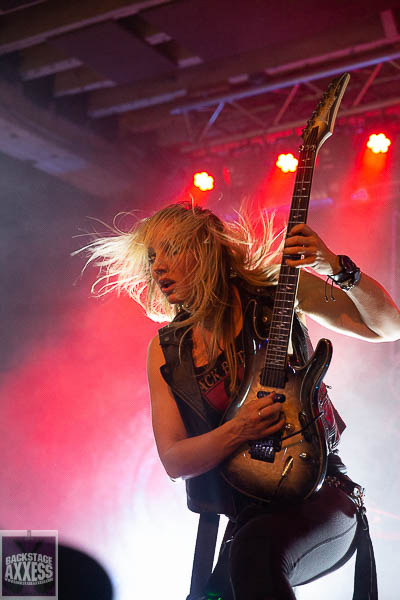 A Hurricane in the form of the hard-rocking guitarist Nita Strauss blew into Iron Works concert hall in Buffalo, NY last Sunday. Strauss has risen through the ranks to become well known guitarist and has been slinging the six string for Alice Cooper’s since 2016. Currently, Nita is enjoying her first solo jaunt in support of her first solo record titled “Controlled Chaos” which was released last year. You can say Strauss plays in a furious yet technical style. What i mean is she plays with precision but with an abundance of unbound energy while doing so.

Opening with a speedy “Pandemonium” Strauss took command early and did not let up for a minute. “Alegria” was next as her nimble fingers flew across the frets and her hair followed with a wild show of its own. Dressed in tight black pants and t-shirt and vest, she looked the role of a rock star. What separates her from the pack is her playing. Don’t let her good looks fool you, she can keep up with the best in the genre. Whether it be her speed playing or more generic rock chords, Strauss has the chops to be taken seriously.

“I’m Eighteen” sung by keyboardist Katt Scarlett was a grand tribute to Alice Cooper. This was followed by Iron Maiden’s “Aces High,” another tribute to the time she spent in The Iron Maidens all-female tribute band. Adding in a Queen cover “The Show Must Go On”, Strauss showed some versatility mixing in classical licks. Her bloodline does include namesake classical composer Johann Strauss. Ending with “Our Most Desperate Hour,” Strauss left the crowd cheering. Adding to her appeal, she spent the next hour talking with fans, signing autographs, and posing for fan photos. This tour ends soon so catch her if you can. It is a rare opportunity to see a rock star up close and personal.
Setlist:
Pandemonium
Alegria
Mariana Trench
Lions Among Wolves
I’m Eighteen (Alice Cooper cover)
Aces High (Iron Maiden cover)
The Quest
The Stillness At The End
The Show Must Go On (Queen cover)
Our Most Desperate Hour
We would like to thank Josh V. from Nia’s Management Team for the credentials to review the show.