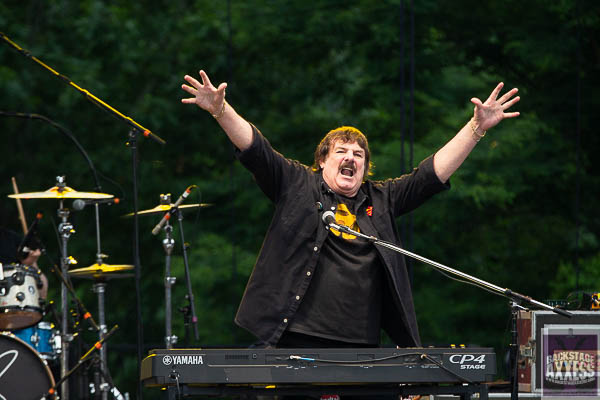 Classic rocker Burton Cummings of The Guess Who came to the Artpark stage last Tuesday and he brought with him a huge bag of classic rock and roll. Cummings was the lead singer of The Guess Who for 10 years. During his stint with the band, they enjoyed their most prolific period by cranking out plenty of  top 10 hits. The Guess Who charted many singles during that time and as Cummings took to the stage, he promised to play a few of them. It was a promise that he fulfilled over the next hour and half.

Starting the night with “No Sugar Tonight” and “New Mother Nature,” you could tell you were in for something special. Cummings still has good command of his voice even though the high notes were harder to reach. Another big hit, “Hand Me Down World” followed then came “Clap for the Wolfman.” Cummings brought a story with each song and enjoyed sharing the experiences that went along with it. The cockiness of his early years turned to gratitude as he thanked the audience several times for his successes. “Laughing” and “Running Back to Saskatoon” were followed by “Albert Flasher,” all classic Guess Who staples. The balmy weather was a perfect setting for this walk back in time. The crowd was shouting out titles of their favorite Guess Who song and Cummings was playing them as if he could read the mind of each and every person there. His backup band was a tight ensemble and complemented Cummings with every note. As the evening winded it’s way through hit after hit, Cummings took a few chances with some covers like “Baby Come Back” and “Louie Louie.” The audience was more than welcoming. The big hits closed the set as “American Woman” and “No Time” ended the show but the audience wouldn’t let him go. An encore of “Share the Land” had everybody on their feet singing along.

It was a night of warm memories and classic rock and roll. Cummings exited with more thank you’s to the crowd, many of them whom still lingered singing a medley of Guess Who hits.

No Sugar Tonight/New Mother Nature
Hand Me Down World
Clap For The Wolfman
Laughing
Runnin’ Back To Saskatoon
Albert Flasher
Trouble In The City
Stand Tall
Star Baby
My Own Way To Rock
Baby, Come Back (The Equals cover)
Sour Suite
Your Backyard
Break It To Them Gently
Louie Louie (Richard Berry cover)
American Woman
No Time
Encore:
Share The Land