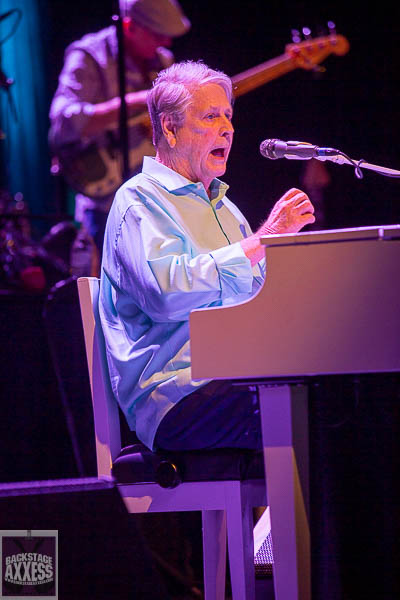 Brian Wilson started his “Pet Sounds” & “Greatest Hits” tour last Wednesday with some bad news. Long time guitarist and collaborator Nicky “Wonder” Walusko passed away peacefully in his sleep the day before. The band decided to carry on and honor Nicky with a large bouquet of flowers in his place onstage and his microphone was wrapped in a black cloth. Being the professionals that they are, the band promised to play the show as a tribute to Nicky. This tour had been scheduled to start last June and it was postponed due to Brian’s medical issues. The show was billed as the final performances of “Pet Sounds.” It was structured in three parts. The first part being Beach Boys hits and some personal song choices by Brian. The second section was the performance of “Pet Sounds” and the third section was a medley of the Beach Boys biggest beach party hits.

Brian’s frail condition was evident right away as he was escorted to his piano by two men that placed him carefully in his seat. Welcoming cheers from the crowd came quickly along with shouts of “Thank you Brian!” as he prepared to play. He looked up and flashed a smile at the audience as the first notes of “California Girls” started to play. The tension in the air seemed to melt away as the sounds of the beach filled the room. The band was full of expert players that duplicated the original Beach Boys sound perfectly. The next few songs kept the mood up and lively. Brian, Al and Matt Jardine shared the vocals for the the evening with Al and Matt taking most of the leads. Blondie Chaplin joined the band for a few songs starting with “Wonderful” and continuing through “Sail On Sailor.” Chaplin played near the spot on stage where Nicky Wonder would have played and gave a nod to his friend’s legacy.
As the band started “Pet Sounds,” you could see Brian’s expression turn serious, as if he was using all of his strength to will the music out towards the audience. This is his masterpiece. The mix of musicians on stage seemed to concentrate more. With 9 musicians playing over 20 instruments, the songs of “Pet Sounds” came alive. Every song was crisp and clear. Brian and Al handled the vocals as if it were the last time they were playing these songs. That may be true as they left nothing inside.
When it came to the title song “Pet Sounds,” the band came together somewhat awkwardly and announced they could not do the song justice without Nicky Wonder playing along. It was a fitting tribute to not play the song.
What followed was an explosion of the best of Brian Wilson’s talent.   From “Good Vibrations” to the finale of “Fun, Fun, Fun” the band and Wilson rock and rolled through the most classic medley of Beach Boys songs. Everyone was on their feet and singing along. It was a moment of pure joy.

Brian Wilson’s music will live on long into the future. This night was a reminder of his genius and all who were there will never forget it. Carry on Brian, and thank you.

Set 1:
California Girls
Surfer Girl
Don’t Worry Baby
I Get Around
Wake The World
Add Some Music
Friends
The Night Was So Young
Wonderful (w/Blondie Chaplin)
Wild Honey
Sail On Sailor
Set 2: Pet Sounds
Wouldn’t It Be Nice
You Still Believe In Me
That’s Not Me
Don’t Talk (Put Your Head On My Shoulder)
I’m Waiting For The Day
Let’s Go Away For A While
Sloop John B
God Only Knows
I Know There’s An Answer
Here Today
I Just Wasn’t Made For These Times
Pet Sounds (not played as an honor to Nicky Wonder)
Caroline, No
Encore:
Good Vibrations
All Summer Long
Help Me Rhonda
Barbara Ann
Surfin’ USA
Fun, Fun, Fun
We would like to thank Dave Wedekindt and Maria Hays from Artpark for the credentials to review the show.
We would like to thank