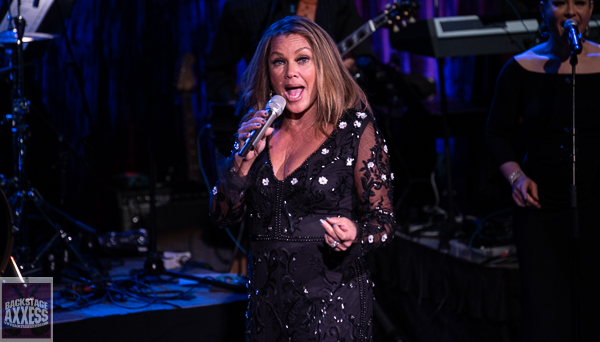 Vocalist Vanessa Williams has very strong ties to the Western New York area. Not only did her mother reside in the area some time back, but her current husband is from the Buffalo area as well. So when it came time to light up this years Christmas tree at the Seneca Niagara Casino, it would be only right to invite Vanessa to the festivities. Before her show inside the Bears Den, Williams braved the cold weather and performed 3 songs outside by the tree. The crowd enjoyed the festivities and it was a nice warm up for her and the fans who were just about to see her inside the cozy Bears Den showroom.

Williams took the stage at 8pm as he band went right into the Isley Brothers classic “Work to Do.” She told stories before most of her songs to give you an idea on where and why she recorded them.   Williams stated that she is mostly known for her ballads before she kicked into “Dreamin.” Pianist Leo Colon joined her for an original cover version of “Baby Its Cold Outside.”  She said he didn’t know what all the “hub bub” about this song is about but want to do it the original way for you and that she did. Colon matched her energy and did a fantastic version of this Christmas classic.

One of her backup singers, Carmen Ruby Ford is originally from the Niagara Falls area and had the entire spotlight to herself on the “Creole Love Call.” The song didn’t include any lyrics, but just raw vocal emotion that poured out at different pitches by Ford. I can say she definitely made her hometown proud with this performance! The other background singer Shelly Thomas Hart joined Williams to co-sing on “Losing my Mind.”

Williams talked about being with the same band for over 20 years and that he first tour was with the late Luther Vandross. You can sense Williams’ connection with her band it showed during the performance. William’s may not tour extensively, but she still has the voice and range and her band dialed it in with her making this show a holiday treat!

Setlist (Lighting  of the Christmas Tree):

What Child Is This? (William Chatterton Dix cover)

Who Were You Thinkin’ Bout

What Child Is This? (William Chatterton Dix cover)

Oh How the Years

We would like to thank Phil Panatno from Pantano & Associates for the credentials to review the show.