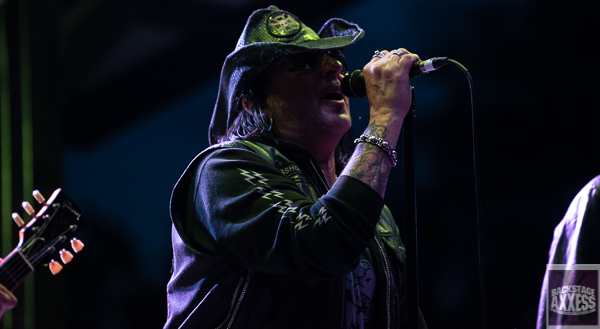 The Big Indian Smoke shop got a little sleazed up this past Saturday night in Irving when glam rockers Faster Pussycat came to town. Back II Back Entertainment brought them and Enuff Z’Nuff and local band Hairnation.  Unfortunately,  Enuff Z’Nuff’s bus broke down on the way as they had a earlier gig that same day at the M3 Festival. Things happen and the rest of the performances went off without a hitch.

The band took the stage around 9:15pm and played 15 songs spanning their entire career. The attendance may have been light but that didn’t detract the band from carrying on a business like approach. They wanted to give the fans who were lucky to be there a great show. The only original member and lead vocalist Taime Downe sounded spot on. He was accompanied by guitarists Xristian Simon and Sam “Bam” Kolton, Danny Nordhal on bass and Chad Stewart on drums. Songs like “Cathouse’ and “Don’t Change that Song” took you back to the late 80’s where it was all about having fun with great music tossed into the mix. The band recently released their first original song in almost 15 years called “NOLA.” The song is about New Orleans and sounded like a traditional Faster Pussycat song. I think the crowd enjoyed it almost as much as the standards. They topped off the setlist with their biggest hit “House of Pain” and the track that maybe most identify the band with in “Babylon.”

It was the first time I saw the band in quite a few years and I was impressed by the performance the band gave. They could have mailed it in due to amount of people who who were there, but that didn’t matter to them. What mattered was putting on a great show and they did just that!

Slip of the Tongue

Ain’t No Way Around It

Number 1 With a Bullet

We would like to thank Ross Cat from Back II Back Entertainment for the credentials to review the show.