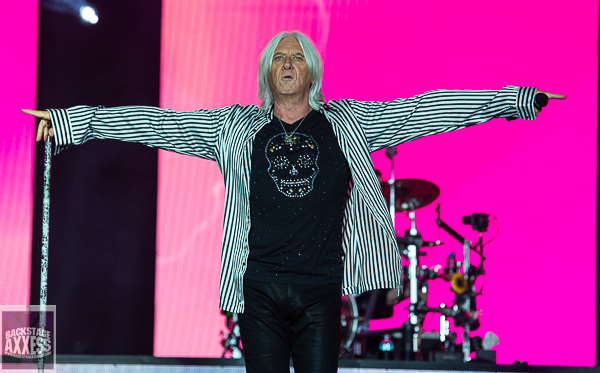 It was an 80’s flashback than more ways to one as you had some of the biggest acts that came from that decade plus a brand new act finally making its way through the WNY area this past Wednesday night. It took over 2 years but after a few postponements in both 2020 and 2021 due to the pandemic, the day finally came for fans to get their 80’s rock on.  Def Leppard, Motley Crue, Poison, Joan Jett and Classless Act gave hours worth of music to hard rock fans alike.

First up was a brand new band called Classless act, I’m so glad we made it earlier enough to catch their 15 minute set. Not knowing anything about them, the band from Los Angeles, California sure made its mark on the short amount of time they had. Led by the energetic front man in Derek Day. He owned that stage like he has been doing it for years. Not only was it just Days stage presence, the band has the songs to back it up.  Tunes like “This is For You and “Give It To Me” fit nicely in with the 80’s general theme for the evening.  They definitely had an 80’s vibe to them and I can’t wait to see more of what this band has to offer.

Next was legendary punk rocker Joan Jett. Within this heavily dominated male testosterone show, it was nice to see some female representation on the bill. Who better to represent the ladies than the Rock and Roll Hall of Famer herself?  Jett had an hour to give the fans all of her hits than then some. Her voice is still fantastic after all of these years and can you believe its now been over 40 years since she released the iconic album “I Love Rock & Roll”? Of course her rendition of Crimson & Clover is one of my all time favorite covers by anyone.  She knocked it out of the park.  I just wish she would add the track “A.C.D.C.” as its one of my favorite tracks of hers. It was a solid set by Jett and her band which still includes her manager and keyboardist Kenny Laguna.

Following Jett were the Glam Slam Kings themselves in Poison. It’s always a treat to see them as they only tour every 5 years or so. Poison still has its original members intact in drummer Rikki Rockett, bassist Bobby Dall, guitarist C.C. DeVille and vocalist Bret Michaels. Michaels who is a type 1 diabetic, had an incident with his diabetes earlier while on tour. It then limited the band to just 6 songs for following performances. This wasn’t the case in Buffalo as the band performed their entire 1 hour set. Of course, it was jammed packed with their hits including “Talk Dirty to Me,” “Ride The Wind” and “Nothin’ But a Good Time.” I wish they would have dropped both the guitar and drum solo for a song like “Cry Tough,’ but that would be the only compliant that I would have about their performance. DeVille killed it on guitar and his partial rendition of Eddie Van Halen’s “Eruption” was spot on!  Poison’s performance may have stolen the show at Highmark Stadium.

Maybe the band everyone was most eager to see was Motley Crue. The band went into retirement following their NYE performance back in 2005.  After their movie “The Dirt” was released back in 2019, the band had a rejuvenation sorts. With the positive feedback the band received about the movie, the band decided to come back out of a short lived retirement.  A lot of negative press was directed towards the vocal capabilities and physical stamina of singer Vince Neil. I though Neil was great out of the gate. As the show went on, his voice wasn’t a strong and did crack on “Home Sweet Home.”  Now, what doesn’t get enough talk when it comes to Crue is teh guitra work of one Mick Mars. Mars is one of the most underrated guitar players on the planet. His tone is always spot on. The show in Orchard Park (suburb of Buffalo), was no different. Mars has ankylosing spondylitis (which affects his spine). This has always prevented him from walking around the stage. I thought he did great this time around and seemed physically better than usual. Drummer Tommy Lee came to the front and played piano for “Home Sweet Home.” Sixx was all smiles and seemed happy that his band was back and playing again.

The headliner for this show was Def Leppard. They are alternating every other show with Motley Crue for which band was to headline. For the show in Buffalo, it was Def Leppard’s turn to close the show. The band is currently supporting their new record “Diamond Star Halos.” Even with the limited amount of time the band had, they were able to slide in a few new tracks in “Take What You Want, “Kick” and “This Guitar.” I will say all the songs flowed seamless through the set but to me,  “This Guitar” really stood out to me. In fact, it was one of the highlights of their set. This was apart of when the band traditionally comes to the top of the thrust and plays a few ballads. They get real close and personal with the fans. The band closed their set with a barrage of their hits in: “Pour Some Sugar on Me, “Rock of Ages” and “Photograph.” It was a tight and fun set delivered by the band.

Overall, it was a fantastic night of music, weather and as Poison says, “Nothin’ But a Good Time” was certainly had by all!