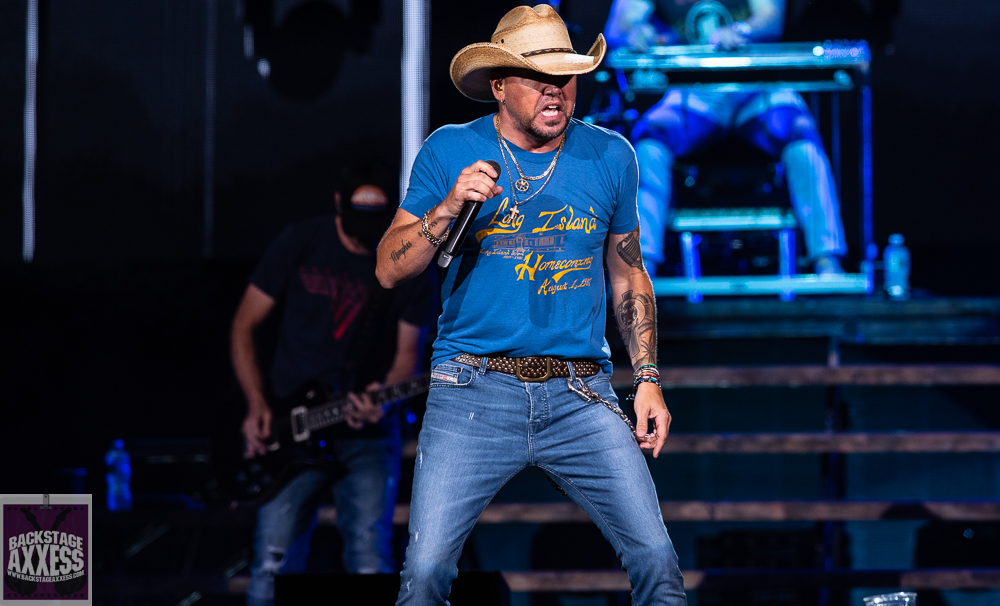 As the summer season is coming to a close, probably the biggest show on the Darien Lake concert schedule was still on the horizon. One of the biggest names in country music in Jason Aldean brought his Rock N’ Roll Cowboy tour to Darien Lake this past Saturday night. Opening up this show were up and comers Gaby Barett and John Morgan.

Opening up the show was John Morgan. Morgan was signed to Night Train Records, Aldean’s imprint with BBR Music Group. Aldean handpicked Morgan to the opening slot of the 2022 tour.  Morgan made the most out of his 30 minute set with tracks like “Coldest Beer in Town’ and “Right in the Middle.”  There was already a pretty big turnout for Morgan and I think his style of country definitely made an impression on not only the handful that witnessed him, but me as well.

Next up was former American idol contestant Gabby Barrett. Barret, who is visibly pregnant, still was able to carry on and deliver a quality 45 performance. Barrett has been making a name for herself with her 2020 release ‘Goldmine.” That album spawned the platinum hit “I Hope.’ Her husband and guitarist Cade Foehner arrived on stage first to try to rev up the crowd.  She then appeared singing “The Good Ones.” Her 45 minute set was a mix of songs from Goldmine as well as a Lady A cover of “Need You Now, Dolly Parton’s “Jolene” and Journey’s “Don’t Stop Believing.”  I thought her 45 minute set also had good reaction as the fans sang both her songs as well as the covers equally. That is a good sign for things to come for her I’m sure.

The openers definitely got the crowd ready for the evenings headliner. Aldean recently released his 10th studio effort in April called “Georgia.”  The lights dimmed and Aldean appeared on a platform behind the drum kit as he made his way down the stairs singing “Lights Come On.”  Aldean  decided to take the stage and sing  the 1st two tracks without his acoustic guitar. The hour and hour and 35 minute set consisted of tracks from just about every album he recorded. It was a wide retrospect of his career. Songs like “Amarillo Sky” that came off of his first disc to “Trouble with a Heartbreak” wetted the appetite of both new and long time fans. He also did an amazing cover of the Bryan Adam’s hit “Heaven.” He also invited out opener John Morgan to sing with him on “The Truth.” Throughout the set, Aldean didn’t really say too much in between tracks. He and his band really the music do the talking. The band finished on a high note with  Hicktown.

Even though Aldean has played this same venue 4 times in the last seven years, the crowd keeps coming back due to the near capacity sellout of 22,500. Its apparent that the WNY area loves Aldean and he loves them back tenfold!

Trouble With a Heartbreak

That’s What Tequila Does

Got What I Got

When She Says Baby

You Make it Easy

If I Didn’t Love You (with Carrie Underwood on video)

Tattoo’s on This Town