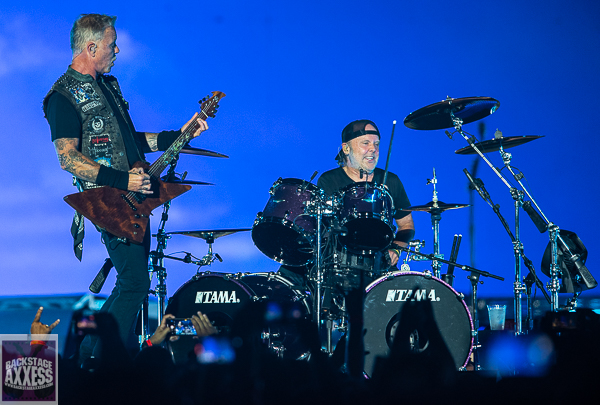 Nothing like a little summer heat to get the juice’s flowing. I’m not talking about the warm muggy weather Buffalo has been enduring for the last few weeks, I’m talking about the band Metallica bringing the fire to Highmark Stadium.  The band welcomed over 40,000 metal fans to hear various forms of music. The various forms included progressive hard rockers Greta Van Fleet and horror metal band Ice Nine Kills.

Taking the stage first was a Boston band called Ice Nine Kills which included local drummer Patrick Galante. The band is currently supporting their new record “The Silver Scream 2: Welcome to Horrorwood.” The band dressed in suits and masks upon taking the stag. They disregarded the masks after a short time. The 40 minute set included 5 of their 9 tracks off of the new disc. The band used every inch of the stage and even used Metallica’s snakepit to get closer to the fans. I thought the band made a great impression on the audience in the time they were allotted.

Following Ice Nine Kills were Greta Van Fleet.  This was the bands first ever appearance to the WNY area. I was very excited to see them as they been super hyped and many comparing them to Led Zeppelin. Easy on any comparisons like that as the band is just starting to get out there. The band is comprised of the Kiszka brothers Josh, Jake and Sam; and Danny Wagner. Josh Kiszka took the stage in a sleeveless gold sequined jumpsuit that both Liberace and Elvis Presley would be proud of.  Even though I felt the energy that Ice Nine Kills built, Great van Fleet didn’t maintain it. I’m not sure if playing in front of Metallica’s fans was too much but the band did make the most of. However,  I did love the bands stab at the song Elvis Presley made famous in “Thats All Right Momma.” A very interesting take and I think they did a great job with it. When it came time to do the last song of the set, “Highway Tune.” I think the band started to get they momentum back again.

The band that many came from all over to see was of course, Metallica. They are not doing a traditional tour. Only selecting a few cities to do a couple of dates, one of those cities included Orchard Park (Orchard Park is a suburb of Buffalo.)  I did meet a quite a few people who traveled east to see the band perform. In fact, at this venue (that has changed names over the years), this is the 3rd time the band has played this Stadium. I am proud to say that I was lucky to attend all 3 times ( June 19, 1988; July 25, 1992 and now August 11, 2022). So you can say the band has some familiarity and certainly some history playing here. The cue came to when the band was just about to take the stage as the song “Ecstasy of Gold,” by Ennio Morricone started to play which the movie “The Good, the Bad and the Ugly” was shown on the back screen.  I should mention that the four giant screens were part of the bands backdrop. There was a small kit at the top of the snakepit so it was assumed that the band was going to take to that part of the stage at the very  beginning of the show.

Sure enough as Metallica took to the stage, it was at the edge of the thrust. The band decided to go all the way back to their first full length album ‘Kill ‘Em All’ as they played “Whiplash” for the opening track. They followed up with their first commercial single in “Creeping Death” which was subsequently from their next studio effort in ‘Ride the Lightening.’ So, first two songs the band reached all the way back into their catalog. You knew it was going to be a great night of music going forward. Then the next tune was “Enter Sandman.” Vocalist & guitarist James Hetfield quipped after, “I guess your thinking they played their good song so what’s next?” Then the band took it up a notch while the crowd fist pumped and did some crowd surfing along to “Ride the Lightning.” The band returned to the mainstage for Ride.  Drummer Lars Ulrich has always been one of the most facially expressive drummers you will ever see as he plays.  At times, he stood up on his kit and motioned his arms for the crowd to come along with him as he delivered the drum beats.  Hetfield even joked about the bands misaligned ‘St Anger’ album. He asked for a crowd response for both good and bad to ‘St. Anger,’ which to no one surprise,  was mostly a so-so or negative reaction. The band still wanted to show love to the album by playing the rare “Dirty Windows.” off of it.  Nothing revs up crowd more than “For Whom the Bell Tolls.” That drove the intensity of the crowd up even more.

With microphones placed at various parts of the stage, Hetfield and his bandmates made use of every inch of the snakepit. Bassist Robert Trujillo and guitarist Kirk Hammett made their way all around the snakepit throughout the show. The twin guitar punch of both Hetfield and Hammett were on full display. That melodic  heavy guitar tone that many try to duplicate, but few can master. The band also included  slew of pyrotechnics for the song “Moth to the Flame.’ and a barrage of fireworks through the encore. Each member thanked the audience for coming and tossed out guitar picks and drum sticks alike at the every end of the show.

Metallica has a long history with Buffalo going back their gig at the Skyroom in 1983 opening up for Motorhead and Raven.  Metallica cut their teeth playing clubs and building their chops along the way. Now fast forward and now with the band primarily doing stadiums and arena gigs, have they lost touch with what they built upon to get to this level.? A resounding NO by the evidence of the gig they delivered to the fans of Buffalo and beyond. they take nothing for granted as they crushed it.  Let’s hope hope that it won’t be too long before the band makes it way back to the area that absolutely loves them since 1983!

For Whom the Bell Tolls

We would like to thank Jillian Condran from Nasty little Man for the credentials to review the show.