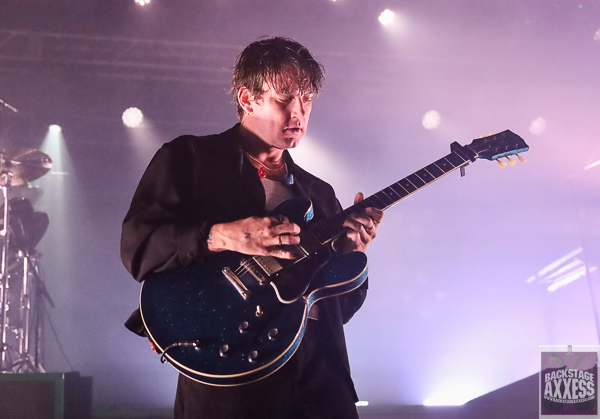 Last Sunday evening,  Charlotte area music fans were treated to a wonderful evening of music when Judah & the Lion came to town. One of the best things about the band is that they offer a little something for everyone musically. With a blend of alternative, rock, folk, Americana, and bluegrass, Judah & the Lion are a breath of fresh air in a world full of cookie cutter bands.

The evening got started with the folk-pop vibes of The National Parks. With a stage set lit up with a huge cactus on each end of the stage and garlands of flowers adorning the microphone stands, the band kicked off their set in fine fashion.  Vocals were traded off between front man Brady Parks and keyboardist and vocalist Sydney Carling Macfarlane for a unique dichotomy of sounds. Violinist Megan Taylor Parks was a showstopper, playing with flair and finesse throughout the set. The crowd was on board with The National Parks from the very first note as the band engaged the fans all evening long. Their set was short but fantastic. If you haven’t checked them out, take the opportunity to do so as you will not be disappointed.

After a short break, it was time for the main event of the night, Judah & the Lion. After dealing with the COVID pandemic, there is something very special about live music right now. Everyone seems to be on a different plane of existence and living in the moment and The Happy Again Tour was no exception.  Lead vocalist and guitarist Judah Akers and  Brian Macdonald on banjo and vocals  brought their fans exactly what they wanted, a night of musical memories that nobody would forget. The stage was lit with a bevy of muted pinks and purples with their tour drummer and keyboardist situated on large risers at each side of the stage with a row of stairs between them. Judah was center stage and Brian set up to his right with their tour bassist stage left. They started off with “Take a Walk” from their latest album ‘Revival.” and the fun had begun. Fans were screaming, jumping up and down, and singing their hearts out. Judah’s vocals were spot on as he led the band through a set that encompassed four albums and all the fan favorites.

A few highlights included a sing-along medley with members of The National Parks as well as an exquisite acoustic performance of “Why did You Run?” Just when you thought the band had nothing more to give they came back for a three-song encore that delivered the title track from ‘Revival,” the quirky and fun “sportz” before the grand finale of “Things Are Looking Up,” which indeed they were after a wonderful evening with Judah & the Lion.

Since U Been Gone/Higher/Snap Yo Fingers

Why Did You Run?

Take It All Back

Things Are Looking Up

We would like to thank Lauren Zelisko from Stunt Company PR for the credentials to review the show.