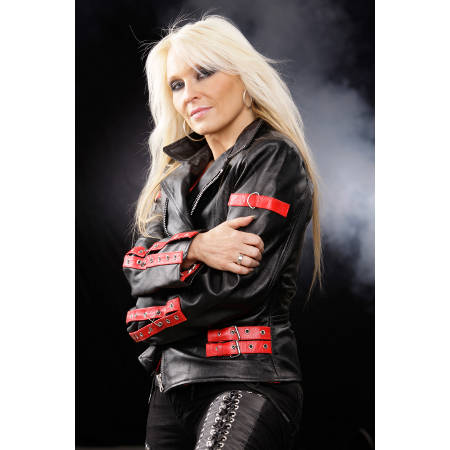 One of the hardest working women in metal took time from her busy schedule to talk to us at Backstageaxxess.com. That woman is none other than Doro Pesch. She currently is on tour in support of her latest release, Fear No Evil. We talked about a slew of things including her relationship with her fans to her long standing working relationship with artist Geoffrey Gillepsie. We also chatted about her 25th anniversary show that took place in her hometown in Germany late last year. Lets see what Doro is up to..

Gus: Its been over a year since I sat down and chatted with you. How have you been?

Doro: Oh, its been really busy and we did a lot of touring this year. We went to really wild new places like China and weve been playing nonstop since the record was finished.

Gus: Can you tell us where you are?

Doro: Right now on my way to Spain playing the Metalway festival in Zaragossa, its 2 hours from Madrid and a great festival where were the headliner on Friday.

Doro: Yes in September. I cant wait Im so happy to see the family. My fans are my family you know that right?

Gus: Of course I do. How long will you be in Europe for?

Doro: We finish the festivals in Europe by the end of August and then were coming to the US to tour and Im so much looking forward to seeing the fans there again. The last two US tours went amazing and Im totally excited about the shows there.

Gus: So you will be doing the major festivals in Europe this summer including your hometown Festival in Germany, the Wacken Festival. I know this is show you always look forward to playing. What can the fans expect different at this show than in the past?

Doro: The Wacken Festival is truly one of the greatest and biggest Metal festivals! I know, and its always a big honor to play there! Theyre celebrating the 20th anniversary and we will put on the best show we can possibly put on. Well bring our big stage set and the Warlock as well. Pyros and a lightshow like we did on my 25th anniversary and that was the biggest show weve ever had till this day.(Oh, by the way Wacken is close to Hamburg and far away from my hometown Dur Meldolf.)

Gus: Looks like I need to study up on my geography knowledge of Germany (laughs.) Your currently on tour in support of your latest effort Fear No Evil which just was released earlier this year overseas but released here in the United States on June 2nd. You have been working on this CD for sometime now. Some songs like Celebrate and 25 Years are songs dedicated to your fans. How was this songwriting process different than your previous efforts?

Doro: I always go with my gut instinct and write from the heart. I wanted to put out an album with great anthems, fast aggressive double bass songs and beautiful meaningful ballads like Herzblut and Walking With The Angels.

Gus: You did a duet with Tarja Turunen (who is a Finnish soprano singer.) How did you get her involved with the song and how was it singing a ballad with her?

Doro: Tarja was the former singer of Nightwish and I always loved her voice and I thought Walking With The Angel would be fantastic with two female voicesWe became great friends too and I was doing a duet with Tarja on her song The Seer as well.

Gus: Artist Geoffrey Gillepsie has created all of your covers since the early Warlock days. He came up with another masterpiece of a cover for Fear No Evil. Is there any pressure on him that he needs to outdo himself every time you have a release of new material?

Doro: Oh yes, I think as an artist you always feel that pressure and Geoffrey always amazed me with his new artworks but I know he is going through hell each time till its finally done and great and MAGIC!!!! I love his style sooo much and hes a fantastic unique person as well.

Gus: Last year on December 13, 2008 you celebrated your 25th year in music with an anniversary concert in Germany. Many artists showed up to help you celebrate it. How was the overall experience for you that night?

Doro: That was the happiest day in my life and I want to thank all the guests and the fans so much for their tremendous support that day. We filmed the show as well and after the whole touring I want to work on the new DVD. The show was 3.5 hours long and I cant wait to see it again and do the editing and mixed and show it to all the fans world wide but it probably will take a long time till its all finished and mixed.

Gus: Any funny stories to share with us from the show?

Doro: Oh that will be a surprise for the DVD boxset.

Gus: Sounds exciting. You have performed and worked with so many musicians over your career. If there was one artist out there you havent worked with, who would it be and why?

Doro: Ronnie James Dio because I love his voice and we did some great tours together and got along so well and had so much fun together too. He was always a big, big inspiration to me and he has a huge heart and is a super nice person. I have tremendous respect for him.

Gus: Tell Johnny and the rest of the guys we wish them well and hope to see you soon and thanks for talking with us at Backstageaxxess.com.

Doro: I thank you so much too and Ill tell the guys and wish you and the readers all the very best!!!

We appreciate the time Doro has taken from her busy schedule over in Europe to talk to us at Backstageaxxess.com. For more information on Doro’s new CD “Fear No Evil” and her upcoming tour dates, you can go to: http://www.doropesch.com/ for more information. We also want to thank Carol Kaye of Kayos Productions for setting up the interview.