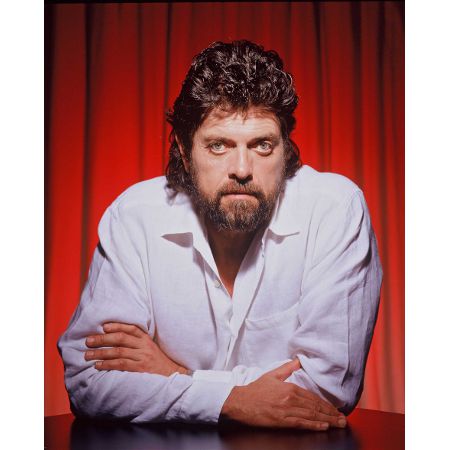 Alan Parsons began his career in the music business as an assistant engineer at Abbey Road Studios and worked with The Beatles on the legendary album named after the legendary studio. As if that were not impressive enough, Parsons won a Grammy for his engineering work on Pink Floyd’s “Dark Side of the Moon.” Parsons went on to lead the successful progressive rock group The Alan Parsons Project and later embarked on a solo career. During our interview Parsons spoke about his transition from a studio wizard to a live performer and the state of the recording industry.

Thom: You have a new live album and DVD coming out next month, “Eye to Eye Live in Madrid,” and Ive had the chance to listen to the audio recording recently. It sounds great! The performance was recorded in 2004. What took so long for it to be released?

AP: I can’t really answer that. The interest from the label just came now. It existed for some time. We have been selling it on our website and at live shows, and its a bit of a regret that it was not released sooner. The recording is timeless, the music is timeless. It also represents what the band has been doing right up to the minute. I think it still works.

AP: It’s actually not, but it wasnt until the beginning of this year that my touring group changed.

Thom: Youve been known in the industry as a genius in the studio for most of your career, but at some point you reinvented yourself as a live musician after years of not touring. What caused the change in direction and how has your work in the studio influenced your live stage performance?

AP: I still approach live shows from a production standpoint. I am not a completely hopeless musician, but I am not a virtuoso, either. I basically set up a band to play live for the first time in the mid-nineties. We got the guitar player, Ian Bairnson, from the U.K., and the drummer was Stuart Elliot, who had played on the majority of the Alan Parsons Project albums. The bass player and singers were chosen for their versatility and talent. I was there, to use the term loosely, as a sort of icon and to represent the fact that it was my music, just strumming a guitar and doing some background vocals. As time progressed, I became more confident and started to do a bit of lead singing. To this day, I leave the majority of lead singing to others, but I probably sing three or four songs in the current show. It was a matter of wanting to play live and deciding that an album we had released at the time called “Try Anything Once” had the best potential to sell. This was combined with other factors, including feeling that the technology was improved enough so we could do a live show, especially keyboard technology, because you could call up sounds much easier than you could before and we could recreate some of the more complex sounds that we couldnt do until that time. That way, the sound we produced live was not too far off of what we were producing in the studio. In the past, thats what had been holding us back from performing live.

Thom: So with the technology that exists today, do you think there are less constraints on bands when they record in the studio because there is less concern over whether those songs can be performed live?

AP: Absolutely not! Nobody thinks for a moment about whether a song can be performed live because parts can be sequenced or recorded and played back on a computer. Theres no worry about those types of things anymore. I think if you saw a part and heard a part being played and there was clearly nobody onstage trying to play that part it would be seen with some suspicion. I think you have to pick and choose and decide what should be played by the band, what is realistic, and what can be embellished by means of the technology without getting in the way of the players in the band.

Thom: There used to be a distinction between bands that were great live bands and great studio bands. Do you think that line of distinction is blurred, or does it still exist at all?

AP: I think that both studio and live bands still exist but it is hard to generalize them. There are people that produce an amazing live show just by standing on the stage together, and there are people who need the backup of the technology, the sequences, the tape loops, the drum loops and so on. Music like hip-hop would be nowhere without the technology, while other forms of music simply do not rely on technology to create its sound.

Thom: A few years ago you took part in a live event called “A Walk Down Abbey Road.” How did you assemble such an amazing group of musicians?

AP: I really take no credit for assembling the throng. It was the work of a manager and agent in New York named Toby Ludwig, who had all the necessary contacts with the likes of Ann Wilson, Todd Rundgren, John Entwistle, and so on. The association with John Entwistle introduced me to his guitar player, Godfrey Townsend, who is the guy that put together the band I played with for six or seven years.

Thom: Is he still playing in your band?

AP: He did not play on the most recent tour of Russia and Eastern Europe. That’s not to say he will never play with us again.

Thom: His guitar work on “Live in Madrid” is fantastic.

AP: He definitely does a great job on the album.

Thom: You had the chance to work with John Entwistle, but I have read that it was a dream of yours to work with The Who, or at least have a chance to produce Pete Townsend.

AP: I’m just waiting for the phone to ring. (Laughs.) I would really love to work with Pete. I’ve met all of the members of The Who at various times during my career, and it would be a dream come true to do something with them. I’ve got a new manager and agent so maybe I will get him to work on that before we all get too long in the tooth for it.

Thom: Did you ever get a chance to listen to the last Who album, “Endless Wire?”

AP: I hate to say it but I am a victim of the internet. I rarely go out and buy a tangible product like a CD. I sort of expect new music to find me.

Thom: Do you listen to any new music?

AP: To be quite honest, when I am home I simply do not listen to any music at all, other than the stuff I am working on. I have my home setup and my home studio, and I might occasionally listen to a new CD to get a feel for what other people are doing. Most of the time, Im listening to what I am working on at the moment. Recently, thats been this encyclopedia of sound recording Im working on called “The Art and Science of Sound Recording.”

Thom: That program covers all aspects of sound recording.

AP: Yes, it is a full-blown video series which should come out next month as a three DVD set. About two-thirds of it is already online and can be streamed or downloaded in separate pieces.

Thom: I previewed a part of it, and theres a section where you talk about how what makes a real symphony orchestra sound real is the fact that somebody’s playing is slightly off, and that is the difference between real and synthetic music.

AP: Yeah, you could even go as far as to say that if you have one person play forty different parts, it would only sound like four violins. It is the slightly different styles and timing that blend together to create that unique sound of a real orchestra, which simply cannot be faithfully recreated. The sad thing is that most people cannot appreciate the sound of a real symphony orchestra because even most movie soundtracks are synthesized as a way to cut costs.

Thom: You have played an important role in the making of classic albums like “Abbey Road” and “Dark Side of the Moon,” so I am curious what group of musicians would make up your dream band?

AP: Actually, I have had the chance to work with my dream players on the “The Art and Science of Sound Recording,” including Simon Philips, who used to play drums with The Who and Toto, and bass player, Nathan East, who has played with Clapton and many others. I have played with many great keyboardists. I recently worked with Rami Jaffe, who has worked with the Foo Fighters, and he was great. If you asked me who the greatest keyboardist of all time is, I would probably say Greg Phillinganes. Nonetheless, you can’t just assess musicians based on their technical wizardry, you have to assess their suitability with regard to the other band members and what you need for a particular track, you have to have a feel for how they will interact with other musicians. That, unfortunately, is a lost art, because so many recordings are done piecemeal with a midi playing the various parts. There is still no substitute for a band playing together in the same room. And now with the internet, many of the music is recorded in different locations and assembled later.

Thom: Are you planning on touring the United States to support “Live in Madrid?”

AP: We have some tour dates planned for Paris and Mexico over the next few months, but nothing yet in the States.

Thom: Thanks for taking time out from your day to chat with us.

AP: It’s been a pleasure, and I hope you get a chance to see us if we play in the area.

We would like to thank Luke Marquez from VQPR for setting up the interview. For more information on Alan, you can go to: http://www.artandscienceofsound.com/ or http://www.alanparsonsmusic.com/.