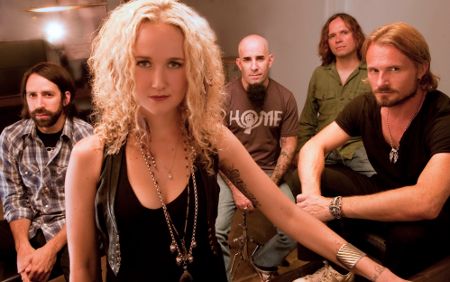 Pearl Aday’s debut album “Little Immaculate White Fox” is one of the best rock albums to come around in a long time. From beginning to end, the songs seem to blend perfectly, mixing hard rockers and bluesy ballads. Pearl recently finished a short North American tour to promote the album.Pearl recently discussed her approach to laying out the albums song order. “My father taught me that laying out an albums song order should be approached the same way a baseball manager sets his lineup. You put your strong hitters up front and I did that with “Rock Child” because it’s about who I am.”
In case you did not know, Pearl’s father is one of rock’s elite, Meat Loaf. Pearl’s name comes from what is arguably Janis Joplin’s best album and certainly one of the greatest albums in music history. Thus, Pearl is not only named after a legendary album, she is also the child of the artist who recorded one of the biggest albums in music history.
In an era where the album is less important in pop music- but seeing reemergence in live shows with scores of rock artists performing their classic albums in the original running order- ‘Little Immaculate White Fox’ is a treasure for fans that love complete albums. Nonetheless, Pearl stated, “There aren’t a lot of albums I listen to from beginning to end.” Some of the few she cited as her personal favorites include classics like “Pearl” by Janis Joplin, “Janis Joplin’s Greatest Hits” (which Pearl noted that even though it is a greatest hits packageshe loves the running order) Joni Mitchell’s “Blue,” and Dylan’s “Blood
on the Tracks.” Other great albums Pearl cited were Motley Crue’s “Dr.Feelgood” and Skid Row’s eponymous debut. “When I was a kid I used to save up my allowance to buy Crue and Skid Row records and Circus Magazine.”

Years later Pearl received the opportunity of a lifetime performing as a backup singer for her childhood idols, Motley Crue.”That was in 2000 on the Maximum of Rock Tour with Megadeth and Anthrax, it was on that tour that I met Scott (Aday’s husband Anthrax guitarist Scott Ian). It was a great experience, I knew all the words to the songs and there wasn’t a night on the tour I didn’t have a ‘holy shit’ moment. I mean I would look out at the crowd and think, ‘holy shit, I am onstage with Motley Crue.'”
After years as a backup singer for her father and Motley Crue, Pearl was ready to front a band but she admits, “fronting a band is a lot different from being a backup singer.” Nonetheless, Pearl’s shows are getting excellent reviews and she attributes her work ethic to her father.”I watched my dad get ready for shows and he gets himself really pumped up and just gives it his all. I do the same thing, when I get onstage I give it everything I’ve got.”
There are many great songs on “Little Immaculate White Fox” one of them has a unique title, “Love Pyre.” Pearl explained its meaning, “I wrote that when I was really angry. I had just gotten into a fight with a friend of mine and the song is about that. A Love Pyre is like a “Funpire,” a Vampire sucks blood out of its victims and a “Funpire” is the person who sucks out all the fun.”
Pearl recently completed a spring tour to promote “Little White Immaculate Fox.” With no financial support from the record label for the tour, Pearl and company are promoting the album the old fashioned way, with hard work.”We got people who are Meat Loaf fans because of me and because of Scott there are some Anthrax fans, but after the show they are leaving with our album.”
In the song “Rock Child” Pearl writes, “I ain’t no sycophant with a black heart or a silver spoon with a head start but I need a spotlight before I fall apart.” Now that she has that spotlight, the rest of us can watch and enjoy the music.

We would like to thank Kymm Britton from 60 Cycle Media for allowing us time with Pearl. For ore information on ‘Little Immaculate White Fox’ and Pearl tour dates, please go to: http://www.myspace.com/pearl