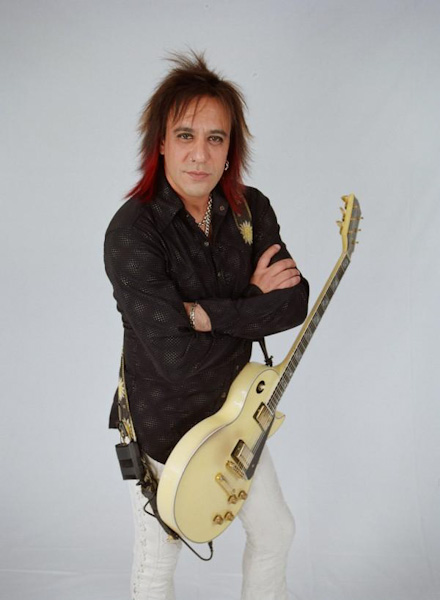 With over 20 million albums sold and numerous chart-topping hits such as “Night Songs” and “Don’t Know What You Got (Till It’s Gone),” Cinderella is well known for their infectious brand of bluesy, hard rock. To celebrate their 26th year of touring, they have kicked off a 2012 Summer Tour here in the U.S. We had the unique opportunity to speak with guitarist, Jeff LaBar, and find out all the details.

KE: Hi Jeff, Thank you for taking the time to call in with us here at backstageaxxess.com today and catch us up on things.

Jeff: Not a problem. Thank you for having me.

KE: Cinderella has just kicked off their summer tour. How is that going for you and what can the fans expect to see?

Jeff: It’s going great so far. The fans can expect us to be pretty much exactly the same as we always have been. I mean, not to like I guess toot my own horn but we all still have long hair, we’re all still relatively thin and we’re aging gracefully and we’re still putting on a kickass rock show.

KE: Yes, you are. I got the chance to see you last year in Charlotte and it was an excellent show.

Jeff: Thank you very much.

KE: I see that you have a tour stop in Western New York in August at a new venue, Braun’s in Akron, NY. Now I know over the years you have opened many clubs. Is there one particular time that stands out? Maybe a crazy story you could share with us?

Jeff: I got you. I look forward to it.

KE: Getting back to touring. I know one of the first tours Cinderella ever did was with Loudness. What was that tour like and how would it compare to the tours now?

Jeff: Well, that was our very first tour away from home. After we made the first record, but before the first record came out, we were still playing the same clubs that we were playing before we made the record. So this first tour we got was Loudness and I’m a big fan. My mother’s Japanese, why wouldn’t I be? I was listening to a lot of that type of music then, the early eighties shredder bands. Yeah, I love Loudness and that was very cool. It was us and Poison actually, us and Poison’s first tour, both of us opening for Loudness. It was awesome. It was a small theater, auditorium type of tour, started in Santa Monica. That was my first time in California and it was just a thrill to be on tour. It was kind of the size of the tour we’re playing right now. But I got to know them a little bit, they were very cool. They were very funny, funny little Japanese guys. That was the year that David Lee Roth put out “Eat ‘Em and Smile,” his first solo record away from Van Halen. So it was a big deal. He was putting together his first tour, Steve Vai, Billy Sheehan, and Gregg Bissonette. They were looking for an opening band, us and Poison were up for the slot. That was the best part of the tour. That was getting to know Poison. Now we have a twenty five year relationship and we’ve toured together five or six times, something like that. But we were both up for the opening spot for David Lee Roth and we got it. So we did five months with David Lee Roth and he was selling out two nights in some cities in arenas. Then we got on the Slippery When Wet tour with Bon Jovi. So we were on like the two biggest rock tours that year, 86, 87. Bon Jovi and us were on the same label and that was good for Mercury/Polygram. We were selling out like up to five arena shows. So that was a very good year.

KE: I remember those tours and it seemed like Cinderella just took off like a rocket. Were you expecting “Night Songs” to do that well or was the sudden success a surprise?

Jeff: Well, I had no expectations for “Night Songs” although hopes were high because as we were recording it being a new band, the budget was exceeded constantly. Every time we ran out of money we had to go back to the label. So the A&R guy would come out and see what we had so far and determine whether we deserved more money. And they would give us more each time. So it was like, Oh we’re doing well. Yeah, I had no expectations. It was all just like, it was overnight for everybody else but for us it was a long journey and some hard work. It was gradual for us from the time that we got signed to the time that the record came out was a year. I know a year doesn’t sound like a long time unless you’re in it. Even after we had done the record, working the same town with the same people in the same clubs. There was a little hype in Philadelphia and south Jersey. Well actually, there was a lot of hype but it was all local. So, I didn’t know how it was gonna do nationally but then slowly but surely the pieces came together. Loudness and Poison and David Lee Roth and Bon Jovi . By the time we got on Bon Jovi, it was blowing up. The record went gold with David Lee Roth and the Bon Jovi tour was ridiculous. “Slippery When Wet” was number one on Billboard and we were number three. The label couldn’t have been happier.

KE: It was a great record. I love the gritty, bluesy feel. What were some of your musical influences early on?

Jeff: For me, personally, seventies rock, a lot of British rock from the seventies along with Zeppelin and Deep Purple. Stuff like that. I also listened to Yes, Genesis, Pink Floyd, Jethro Tull, Emerson, Lake & Palmer, a bunch of keyboard oriented music. Then like Black Sabbath. Alice Cooper was a big influence on me. Tom is from an Aerosmith and bluesy kind of background. Both Tom and Eric were big KISS fans. AC/DC, Zeppelin, KISS, Aerosmith, those are the big four.

KE: Is there anybody that you would like to work with, a dream tour maybe?

KE: Are you working on any new music with Cinderella?

Jeff: I don’t know, not now, maybe in the future. I would like to.

KE: What about any side projects? Are you doing any solo material?

Jeff: Yeah, we all do stuff. We’re only together a few months out of the year. We’re only touring a few months out of the year so we all work in the music business separately. Although me, Tom, and Eric all live in the Nashville area so we see each other but Fred lives out in L.A. He’s got a studio and he’s working on stuff constantly. Tom’s been working on a solo record for awhile. Me and Eric farm ourselves out to other projects and records. Maybe put a solo on this or do a record for someone here and there. I live in Nashville so it’s not hard to get work. I’ve been playing around with a solo record too for a little bit. When I get done with this tour, I’m gonna try and finish at least one song when I get home and just throw it up on You Tube or something.

KE: Well, there certainly are a lot of options out there to get your music out. Do you think it’s easier for bands now that they can have that immediate exposure?

Jeff: I think it’s easier if you know how to do it. It’s easier if you’re young and you grew up with this technology. Me, not so much. I grew up when we recorded on tape and you were on a label that gave you a bunch of money and said here, make songs and we’ll do the rest. It’s not like that anymore. Everything is online. Yeah, I have to have younger people tell me how to do it. It’s like dad telling his son, here tell me how to get on facebook. I do that with my wife. I give her my iPhone and tell her, here make a phone call for me.

KE: Speaking of technology, music videos played a big part in the early part of your career. Do you have a favorite video or video shoot?

Jeff: Hmm, my favorite video is “Shelter Me.” Do you remember that video?

KE: Yes, that was the one with Little Richard in it.

Jeff: Yes, Little Richard, Pam Anderson, who else was in it? I think Dweezil Zappa was in it. There were a bunch of people. It was so much fun to make that video and the final product is great. All the acted scenes, I mean we’re in it not so much. We shot for like half a day and the whole rest of the video took like three. They act out like every line in the song. I just think it’s funny and I think it’s a poignant video. I don’t know if a whole lot of people got that but it’s a very cool video for the times.

KE: You did an internet radio show with your wife a few years back, Late Night with the LaBar’s. Did you enjoy that and would you be open to doing something like that again?

KE: When you’re not busy with the music business, what are you doing in your free time, if you have any?

Jeff: I don’t really have any hobbies but I cook. I don’t know if that’s a hobby or a necessity. But I cook at home a lot. I cook Japanese. My mother’s Japanese and I’ve been learning all her recipes. My mom’s like most moms, she’s the world’s best cook. I do a lot of cooking and experimenting not just heating stuff up. I actually cook. (Laughter) If not that, then sitting on the couch watching ESPN. That’s about it.

KE: Thanks again Jeff for taking the time to call us today and we look forward to seeing you out on tour this summer.

Jeff: No problem. Thanks again for having me and I’ll look forward to meeting you all out on the tour.

We would like to thank Sky Nicholas from Union Entertainment Group for setting up the interview with Jeff. For more information on Jeff and Cindrella, please go to: Cinderella .

For more information on purchasing tickets for the Cinderella show in Akron, please go to: Tickets.